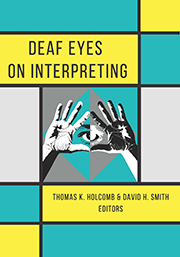 This is the fourteenth weekly installment featuring highlights from the 20 chapters in the new book, Deaf Eyes on Interpreting, edited by Thomas K. Holcomb and David H. Smith which was released in June by Gallaudet University Press.

Fallon Brizendine is a Deaf professional working to educate future interpreters. She expands on concerns raised by Amy June Rowley in our last blog post regarding placing novice interpreters in the pivotal role of working with Deaf children in mainstreamed schools. Whether they like it or not, without a critical mass of Deaf language models in their lives, the Deaf students will look to their interpreters as language models. This places a heavy responsibility on them.

However, Brizendine has some concrete ideas to remedy this situation. She suggests that interpreters be ready to take on this important role by visiting bilingual ASL/English classrooms and observing the bilingual teachers to see the manner in which they deliver lessons and interact with their students in ASL. She also puts responsibility on Deaf professionals who work in the educational field, such as herself, to connect with educational interpreters and offer them feedback and support.

This is the thirteenth weekly installment featuring highlights from the 20 chapters in the new book,Deaf Eyes on Interpreting edited by Thomas K. Holcomb and David H. Smith which was released in June by Gallaudet University Press.

Rowley emphasizes several points: young Deaf students in mainstreamed settings are often isolated without full access to language, culture and social opportunities. Interpreters may be the only persons with  knowledge of Deaf culture and ASL, yet many interpreters do not have a clear understanding of the scope of their roles. In fact, Interpreter Training Programs often put their students in educational settings as internships, giving the message that this is an appropriate place in which to start their careers. Rowley disagrees and sees it as a place for experienced interpreters with many years of experience.

She recommends interpreters partner with members of the Deaf Community and educators of Deaf children to give Deaf children the best, most supported start.

This is the 4th weekly installment from the 20 chapters in the new book, Deaf Eyes on Interpreting, edited by Thomas K. Holcomb and David H. Smith, which is scheduled to be released in June by Gallaudet University Press. This chapter, American Sign Language Interpreting in a Mainstreamed College Setting: Performance Quality and Its Impact on Classroom Participation Equity, has three co-authors John Pirone, Jonathan Henner, and Wyatte C. Hall.

As John Pirone describes in the video clip above, their research shows it is an illusion to think that providing an ASL  interpreter in mainstreamed college classes provides equity for the Deaf students. He enumerates several areas of concern regarding interpreters’ skills and actions, including lack of ASL fluency, less than adequate ASL receptive skills, intercultural incompetency and lack of professionalism. In the full chapter,  the co-authors propose solutions to this troubling state of affairs for Deaf students in interpreted college classrooms.

Last week, I joined the warm crowd who welcomed Dr. Paddy Ladd at the California School for the Deaf in Fremont, California, where he treated us to a sneak preview of his new book that challenges the prevailing methods in Deaf Education, which have been invented and promoted by hearing people.

Ladd provocatively engaged the audience with, “We’ve been colonized!” and continued, “Books on Deaf education are written by hearing people, and our perspective is not incorporated in the curriculum. This has the consequence that Deaf children show poor results. Then the blame is placed on the parents, on the child, on sign language–everywhere other than where it belongs.”

“Why not trust those who have been successfully educating Deaf children for generations,” Dr. Ladd proposed, namely Deaf educators. This topic, which Dr. Ladd has been researching for many years, is the focus of his new book, a 300+ page volume he hopes to have finished next year, tentatively entitled,

SEEING THROUGH NEW EYES: Deaf Pedagogies and the Unrecognized Curriculum.

Dr. Ladd acknowledged the inspiration and support received from Dr. Hank Klopping, retired CSD Superintendent, and CSD teachers Laura Peterson and Dee Kennedy. He praised CSD’s Bilingual-Bicultural approach and its excellent teachers. He also recognized his co-researcher on the studies that form the basis for his new book, Dr. Donna West, a hearing teacher, who “helped him see things he otherwise would have missed.”

Now that his Department of Deaf Studies at the University of Bristol is closed despite a public campaign to save it, Ladd cited the upside of having more time to write and finish this book.

Against a background of “Cultural Holism,” Ladd outlined six overlapping Developmental Stages, from ages 0-5 “Developing the Cognitive Engine” to ages 7-18 “Teaching how to live in Deaf and Hearing worlds.” One cultural point I especially appreciated was his suggestion of contextualizing “Deaf bluntness” or “Straight Talk” as it shows Deaf children that you care and that they are loved.”

His book draws parallels with other indigenous peoples and minority communities such Maori, African-American and Native American and he gave special recognition to Dr. Marie Baptiste of Canada, her work with Indigenous Knowledge and her assertion that cognitive imperialism by “others” inflicts “soul wounds.”

The anticipation is high for Ladd’s new book after the huge impact his first book Understanding Deaf Culture:In Search of Deafhood has made around the world.

A personal note: I first met Paddy Ladd in 2000 in Amsterdam at the TISLR conference (Theoretical Issues in Sign Language Research) where we both presented. My book had just come out and he was still working on his. We connected against the backdrop of extremely theoretical papers because both of us hoped that our work would result in practical changes. Then in 2002, at Deaf Way II, Tom and I were honored to be invited by Paddy to join him in a panel he chaired called Researching Deaf Culture, Liberating Deaf Community (with Ben Bahan and Theresa Smith). Here is a very old picture of us all.

And I just found that Gallaudet recently made available online a video of the entire panel presentation at:

Please be advised that Paddy signs in BSL (the rest of us in ASL). The video includes voice interpretation, but no captions.